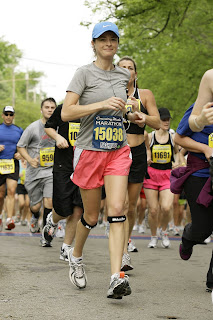 The Country Music Marathon was such a great race!  There were 30,000 runners in all - most running the half.  The start of the race was one of those times when I really wished I had an iphone so I could have taken a picture.  It was so cool seeing the streets filled with so many healthy, happy people.  I got a huge rush just from the crowd and had the chills when the race started - I love road races!


The only bad part about the Country Music Marathon?  The weather.  I was a nervous wreck the week before - all week long thunderstorms were in the forecast but I tried to stay positive.  After all, the weather forecast often changes daily.  However, the closer it got to race day, the worse the weather looked.  Major thunderstorms were forecasted to come into town the next morning.  Friday night when we got to our hotel, there was a notification saying if runners were not on pace for a  4:30 marathon at mile 11, they'd be re-routed to do the half.  I felt pretty confident I could set a faster pace than that, but it did make me nervous.


The race was supposed to start at 7 a.m. but the morning of, they pushed it up to 6:45 a.m. to try to beat the weather.  Random side note - I learned about this in the elevator from a woman who ran a marathon last year on her 60th b-day - total inspiration!  Anyway - I ran a steady 10 minute mile pace the whole time and really enjoyed it!  The community of Nashville was out in full force and it was so fun seeing families with their kids and dogs tailgating, handing out orange slices, drinking beer/mimosas/coffee, and enjoying the day!  I won't go through each mile in detail but will say that the hardest part for me was at mile 11, when we split off from the half marathon group, and I saw a sign that said "Good Job Marathoners!  15 Miles to Go!"  That definitely took a toll on me mentally.  But around mile 14 I regained my confidence and rocked it til 21.  That's when the storms came in, hard. At 22, we got re-routed by the police (not without a fight...the guy next to me yelled "go eat some more donuts!") and had to pick back up around mile marker 25.  This was a HUGE let down for me, but after thinking about it all weekend, I still feel that I can say I ran a marathon.  I trained for 4 months and went through all of the ups and downs that come with marathon training, felt great during the race, and I would have finished if it were not for two police cars literally blocking me from following the course.  They actually yelled "you will be arrested if you turn that way!"


So, I guess the silver lining is I can say I ran a 3:46 marathon, right?   I know now by the pain that I went through with training, and the serious pain I have post race, that I will not be able to run another marathon.  My knees wouldn't be able to take it again.  That's ok though - I love running and hope that it will always be a part of my life, just in shorter distances.


A few other notes about the weekend - one thing that was strange is that I never experienced the ravenous appetite I was hoping for expecting.  That's not to say I didn't enjoy lots of pizza and beer Saturday night or down some Chipotle for lunch the next day, but I was just assuming I'd want to eat a horse and I really didn't.  Bummer!  :-)


We had a great time with our friends Chris and Chaundra - Chaundra ran the race too and John and Chris were our awesome cheerleaders!  They ran around the course and saw us about 4 different times.  Here's Chaundra and me after the race: 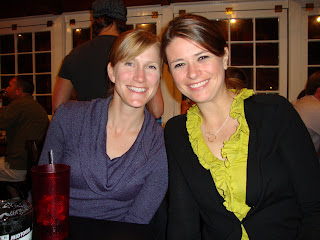 So what's next?  First things first - a whole lot of nothing.  It hurts to bend my knee, let alone walk, stand up and down, get a dish out of the bottom cabinet...you know - things we 27 year olds take for granted.  After my week of rest I have lots of ideas about what type of exercise to get involved in - and yoga is kind of calling my name!  The idea of a low intensity workout sounds appealing (but someone needs to promise me it won't be boring!).  I also am going to start biking more again, walking Sam lots, and seeing what comes next.  I really want to start giving the blog more attention too - and by doing so focus on all things health related that I love - writing, exercise, cooking, and health musings in general.  If there's something you'd like to see more of (or less of) - please tell me!
Posted by Tracy at 10:14 PM